I love birth stories. They are filled with such power and wonder, tenderness and strength.

So during the month of August, I will be sharing the birth stories of my other children (here is baby number 4’s ). Be forewarned, they are not necessarily in order (just to keep it interesting….and slightly confusing…)

Since both my other children were both born well beyond 40 weeks, I really wasn’t surprised by this. Nonetheless, I was feeling anxious and worried, both about the possibility of a hospital induction if I didn’t go into labor on my own and the labor itself should it naturally begin. I had endured a successful membrane sweep at 40 weeks, but wasn’t sure I could emotionally handle another. My midwife had checked on me the day before and confirmed that this little boy was backwards, much like my other son had been and was worried that I would be too tired to handle labor should it begin soon.

Having two other children under the age of three and two hits of bad winter illness had made me much more tired this pregnancy. I remember trying to hold back tears as she showed me a couple exercises to perform to hopefully encourage the baby to finish turning around. She left me with instructions to rest and hopeful reminders that this baby will indeed come soon, one way or another. 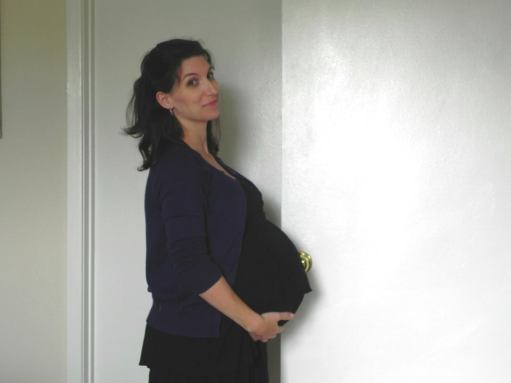 I woke to the first contraction. Far stronger than a Braxton hicks, I remembered this signal for my body to begin work. I rose without waking my husband, grabbed my contraction timer, and waddled to the kitchen. I spent the next couple of hours timing my contractions, drinking tea, and eating what I could.

Contractions were consistently 10 minutes apart. I was still able to sit and relax through them but were now requiring more of my attention. My husband and the kids were awake and I had already called my midwife with an update.

Since third babies are considered wild cards, she told me to keep her updated with any changes and she would head over soon. The contractions had not changed in about an hour, so I persuaded my husband to go teach his first lesson since I didn’t think anything would change drastically in an hour. He may as well go about his morning as usual instead of staying home and watching me like a bomb. Incredulous by my request, he nervously headed off to work, but not without my promise to call him immediately if labor picked up.

Contractions had slowed to 20 minutes apart and I became discouraged. What if this was all a false alarm? My body felt so tired, and I was emotionally worn out. I updated my midwife again, with her assurance that she would still come by, but would complete a couple of her prenatal appointments since contractions had slowed. She encouraged me to rest as much as possible.

My mother was in town helping with the other two children, so she sent me to bed, insisting on handling lunchtime/naptime on her own. I was far too tired to argue so I dutifully obeyed.

I climbed into bed and positioned myself into the “pretzel” (to encourage baby to turn). My husband arrived home and came searching for me. I could no longer hold in my tears, and poured out my fears and frustrations to him. He held me close, prayed over me, and remained by my side until I succumbed to sleep. Contractions would wake me every 20 to 30 minutes, but thankfully, I promptly fell back to sleep as soon as each one subsided. 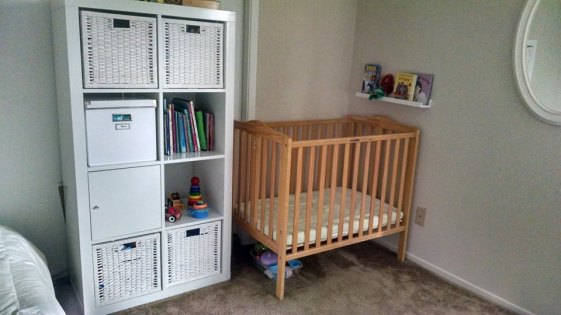 I woke to the sound of the midwives arriving. Looking back, I am so thankful for those couple hours of slumber. God knew how much I needed the rest, essential for the hard task to come. Contractions were picking up again. I rose, nibbled on cheese and grapes, and sipped on water while they set up the bedroom for birthing.

Contractions continued to increase both in frequency and intensity. They quickly shifted from 5 minutes apart to 3. I sat on the ball for as long as I could handle it. Then I would stand and rock while leaning on my husband, praying for my own endurance and protection for my son.

After each contraction subsided, I would rest on the bed and savor the stillness. During one of these respites, I felt a strange “pop!” and jumped to my feet somewhat alarmed. Sure enough, a small amount of fluid dripped onto the floor pads. My midwife quickly confirmed that my waters had broken though estimated that it was a high tear, which would explain the small volume. It would most likely break more as labor continued.

As each contraction hit, I would close my eyes and relax my muscles.

In my mind’s eye, I would allow my body to be carried by each dark, warm wave, rising ever higher up the face of a shadowed mountain. Higher and higher it would lift me, and just when I couldn’t bear anymore, I would reach the peak. There I would softly rest, as the incredible deluge fell back to the depths. For a few precious moments, I would stand upon the brink and cling to the cool silence.

Then I would open my eyes to reality.

Transition kicked in. I was nearly fully dilated so my midwife decided to manually break my waters again to help labor along. After the surprising gush, it was back to rocking. I could longer speak through the contractions; only low, guttural moans escaped me.

As exhaustion began to claim my body, fear also crept into my mind. It became more and more difficult to succumb to the waves. Every inch of my being wanted to fight the pain, to flee from the burden of it. I clung to Dan and pleaded for it to be over. I couldn’t take anymore, I gasped. The midwives and my husband breathed encouragement to me, that I could do this….that I have done this, and everything was progressing well.

I searched their faces for hope and knew their words were true…so I struggled on.

As another contraction rushed upon me, my husband would brace for my weight and whisper, “I’m here with you. Give me the pain. Put it all on me.”

A part of me wanted to scream, “No! You cannot bear this for me! All I see…all I hear is pain. Where I am you cannot follow. I am alone in these dark waves.”

My prayers became pleas and I struggled on.

I began to feel a strong urge to push, so my midwife checked my dilation and confirming that I was complete, instructed me to alternate between squatting and pushing while on all fours. A horrible cramp in my right leg made squatting a challenge, but I pushed through it as long as I could.

I distinctly remember glancing at the clock, noting the time, and thinking to myself, “Come on Natashya. You only have to hold out until 8:00. Just make it to 8:00. Then you can rest.”

My midwife guided me to the bed to continue pushing. She could now feel the baby’s head but noticed that because of his position (slightly backwards), he was being blocked by my pelvic bone. So it was back to all fours for me with my midwife stretching the birth canal to allow more room for the baby to shift.

My midwife decided to attempt one more position to manipulate the baby from under my pelvic bone. She rolled a beach towel and instructed me to lay on my back with my hips propped on the towel. My husband knelt at my side, allowing me to use his hands as a brace.

After a few more pushes, I heard the midwives exclaim, “I can see hair!”

The burning ring of fire became searing as she both guided the baby’s head and stretched my perineum. She purposely forced me to birth him slowly in the hopes that tearing could be prevented.

It was sheer torture as I begged, “Please just pull him out!” She responded, “He’s coming now! You’re doing great! Hold on a little longer!”

I glanced over at my husband, and saw his expression change.

Even though I couldn’t see the baby from my own awkward position, he could. His face shown as if a light were cast upon him, bull of amazement and joy.

That was all I needed to finish the task. I decided that no matter what, I WOULD get this baby out. At the midwife’s next prompting, I bore down with all of my might and pushed!

I cried out as his body left mine…..and heard his own strong voice as he greeted this world.

I laid there panting, completely overcome by the enormous energy I had just exuded. And though I could hear my newborn son crying, I stilled turned to my husband and choked out a desperate, “Please…Is he ok? Is he alright? Please…”

He beamed and reassured me that our little boy was perfect. Relieved, I relaxed and asked, “Can I rest now?”

A good half hour had passed before my body ceased shaking from the shock of childbirth so I could finally hold him. Still lying on the bed, I rolled to my side and they placed the tiny bundle in the crook of my arm.

I gazed at my son’s face for the first time and marveled at all his tiny, perfect features. I held him close and shared his soft warmth. Quietly, I spoke his name. His round eyes blinked at me with surprised recognition, as if he already knew his name and was simply waiting for me to say it aloud.

He was here. And he was ours.